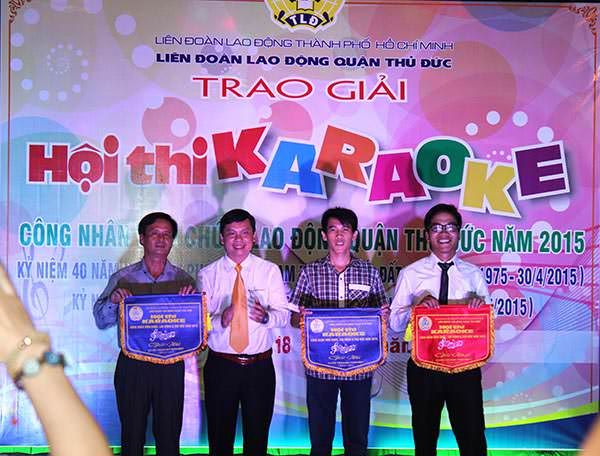 While waiting for the award announcement, the 6 best performances in the final contest (solo and duet) were performed again. The judges, the fans from the companies in Thu Duc district had the opportunity to enjoy the best karaoke performance again.

During the award announcement and awarding, there were 3 groups: Group A: administrative and non-business sector; Table B: Enterprise sector; Table C: Self-managed worker sector.

With the enthusiastic cheers of fans of Tan Thanh company, all 3 performances of Tan Thanh achieved excellent results in 2015 Karaoke competition.

The first prize of the business sector was won by Mr. Dao The Chung - architect of OCDC company with the contest song "Mother" - composed by Phan Long.

The third prize of the business sector was won by Mr. Ho Van Tuan_HR Department with the song "The country call our name" by musician Dinh Trung Can_ poem by Nguyen Phan Que Mai.

The Labor Federation of Thu Duc district also organized a sports festival for employees. This is an activity in response to the program "9th hour" in a worker month and creates a playground for employees. Hopefully, there will be many such entertainment activities so that employees of companies located in Thu Duc district can learn, compete and exchange knowledge with each other.

Performances of the contestants in the 2015 Karaoke competition

Mr. Dao The Chung _ Architect of the company OCDC