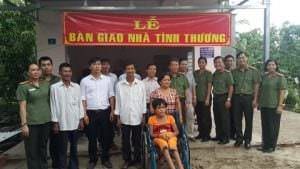 In the morning of July 20th, the police of the city, sponsors and the local authorities of Tan Khanh Dong Commune (Sa Dec city, Dong Thap province) organized the inauguration of 3 charity houses for poor and households under preferential treatment policy.

Failing to have a stable job, earning money by working for others from time to time, Nguyen Thi Bich Van's household (Hamlet 1, Tan Khanh Dong Commune) was in extremely difficult circumstances. Therefore, after being granted the use right of the resettlement land lot in Hamlet 1, Ms. Van's household could not afford to build a house.

Mr. Nguyen Van Hong (born in 1959, living in Dong Hue Hamlet)’s household was also in difficult circumstances. Mr. Hong is a class 2 wounded soldier. He had no job so he had to run a motorcycle taxi to earn money. “My wife is a factory worker in a factory near our home, earning about VND 40,000 a day. Previously, our house was made of trees which has been rotten due to the time and may collapse easily in the effect of wind and rain. I was really worried then the sponsors appeared and helped us", Mr. Hong said. For Mr. Hong’s household, the Women's Union under the Police of the city mobilized VND 40 million from Tan Thanh Trading Mechanic Corporation. 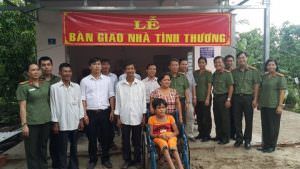 In addition to granting funds to build houses, the sponsor group and the local authorities also gave them many gifts, equipment and household appliances to help the three families have better living conditions.

On this occasion, the Newspaper under the Police of the city also sponsored VND 20 million to implement the program of lighting the countryside in Khanh Nghia Village. This is the main road of the residential area with a length of about 3km. Currently, the road is under construction.