Nowadays, with the trend of global economic development, the demand for goods transportation is increasing, in which, transporting goods by container (cont) accounts for nearly 90% of the world commercial output. So, what has shaped the container, the history of development, and important milestones in the supply chain of goods globally?

Transport of goods by cont means the loading, unloading, transporting and storing of goods during transportation using (Freight Container) special cargo containers, with standardized sizes, large cargo store capacity and strong structure that allows to be used many times.

Transporting goods by containers is derived from and born from researching, searching and experimenting on how to combine small, individual packages into one large cargo, in order to facilitate the loading and unloading and preserving the goods from the port of shipment to the receiving port, thereby improving the economic efficiency of the transport.

The development history of transporting goods by containers until now can be divided into 3 phases.

It was the period starting to apply the transport of goods by containers at an American railway factory (1921) and then in the UK and other continental European countries (1929). During and after World War II, sea transportation, firstly, between regions between the United States, Japan, Western Europe and then to other economic regions, the International Container Shipping Office was established in Paris in 1933 marking the interest and efforts to find economic, technical, legal solutions arose in this promising new way of transport. (1. Bureau International des Conteneurs - Bureau International des Conteneurs) referred to as BIC was established in Paris in 1933 under the initiative of the International Chamber of Commerce and the European Railway Federation for the purpose of research and exchange on economic and technical issues, law ... about transporting Pallets and Containers. 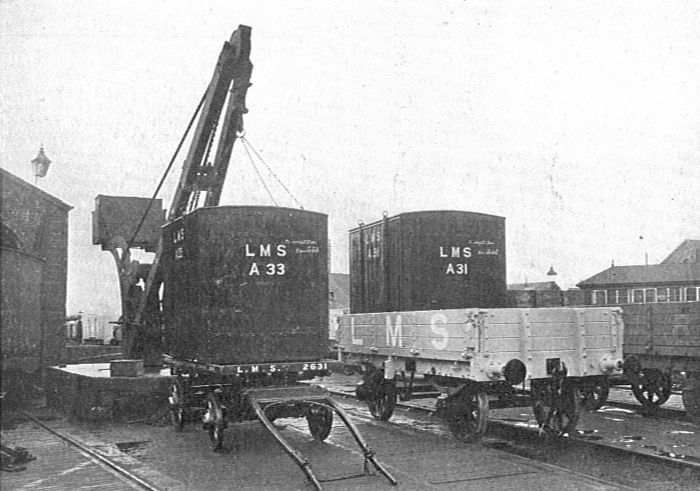 Goods shipping by Containers in London (1928)

This was the stage continuing experimenting and improving the way of transporting goods by Containers. Large containers were produced and quantity increased rapidly. The first full cont Ship "Fairland" of the company "Sea Land Service Incorporation" was built in 1966 and carrying containers between North America, Europe which was a remarkable step forward in the history of cont containerization of the International Sea Shipping Industry. 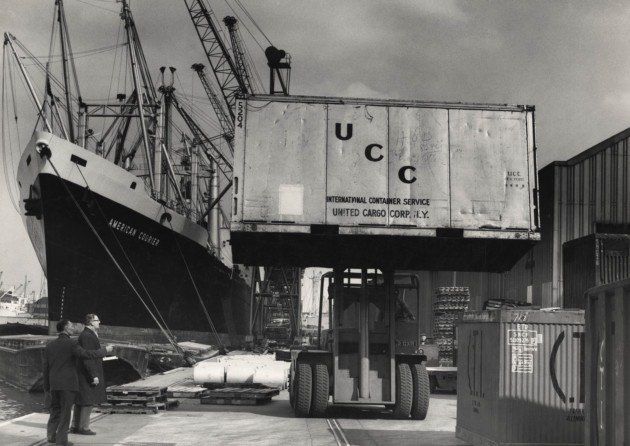 Container unloading at No.4 berth, Royal Victoria Dock in 1964

This is a period of strong and comprehensive development in terms of width and depth of goods transportation by containers on an international scale. Types and sizes of containers have been agreed and standardized, many berths have been equipped with specialized loading and unloading tools for the transport of goods by containers, built and put into use (cont Terminals), the first generation conts (cont sliep), average tonnage of 14,000 TPW, with a capacity of about 600 - 1000 TEU (Twenty feet Equiralert Untt) has also been rapidly improved and supplemented by 2, 3 and 4 contingent ships generations, capacity of 30,000 - 40,000 TDW (with a capacity of about 3,000 - 4,000 TEU).

The above changes of great significance (it is called the new revolution in transport) create a solid basis for the formation of the world cont shipping network, start to invest in the transportation of cont among North America - Europe, North America - Japan, Europe - South North Asia, Europe / Australia and gradually expanding to other countries in the Middle East, Africa, Central and South America.